Skip to content
Stiri Internationale » Bayou and Chatelain: ‘This government has thrown the climate convention to the grinder’ 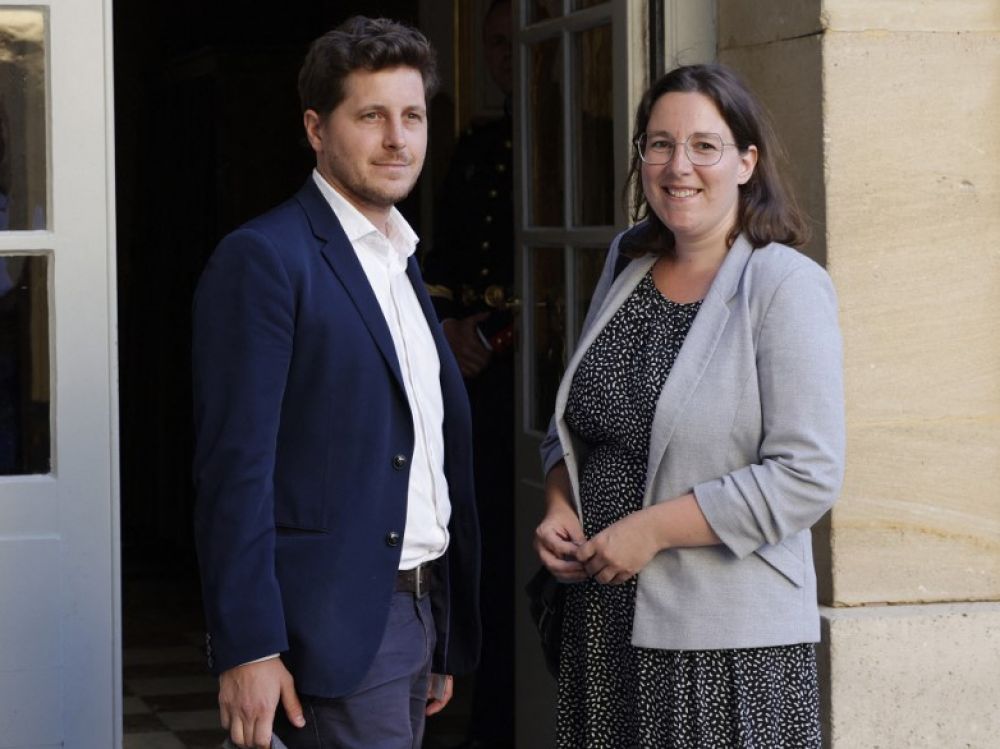 It is an originality that only ecologists know how to produce. And also, a guarantee of modernity. To respect parity, the EELV deputies have chosen to have two group presidents in the Assembly: the very prominent boss of the Greens Julien Bayou and the lesser-known deputy for Isère Cyrielle Chatelain. A duo which however responds with one voice when it comes to criticizing the ecological mistakes of the government “which threw the climate convention into the grinder” and “results from five years of climate inaction”. In the unprecedented context of an Assembly without an absolute majority, they nevertheless say they are ready to reach out to Elisabeth Borne when it comes to enriching a project in favor of renewable energies and the end of dependence on renewable energies. “We will always be there to advance ecology,” they assure.

Challenges – The EELV group has chosen to anchor itself in the opposition by voting for the Nupes motion of no confidence. Yet 82% of environmental sympathizers want their party to negotiate with the government. Is it really tenable?

Julien Bayou, co-president of the EELV group at the National Assembly: It is not contradictory, because this government does not come from nowhere. It stems from five years of climate inaction. It is not a new government that we are going to judge on paper. It was the government that threw the climate convention into the grinder. That’s all of Macron’s world. As well as the historic responsibility of having brought 89 RN deputies into the National Assembly. This is not the mandate of climate action. There are promises, but the reality is setbacks. This does not prevent the fact that if the government opens the door, because for the moment it is the government that is blocking it, we will be there, as we said. We will always be there to advance ecology.

Cyrielle Chatelain, co-president of the EELV group at the National Assembly: We are indeed clearly in opposition but because of the government’s choices. The purchasing power law contains clearly climaticidal measures: the LNG port, the reopening of coal-fired power stations. We have three years to stop increasing our greenhouse gases and nothing has been put in place to achieve this objective. Nothing allows us to say in the first laws that the government will make this policy. We are therefore logically opposed to a policy that does not take this issue into account. Afterwards we are in a new parliament, where we will obviously have to discuss. If at some point the government passes an ambitious law where we manage to push things forward in terms of renewable energies, renovation of buildings, transport, of course we will support these advances. We can no longer content ourselves with the policy of small steps.

Read alsoJean-Philippe Tanguy (RN): “The Assembly, a unique opportunity to give us credibility in the eyes of the French”

How is a personality like Elisabeth Borne, former chief of staff of the Minister of Ecology Ségolène Royal, within the government which had the Paris agreements adopted, so far removed from your positions?

Julien Bayou: I was told that she had a left-wing background, I saw that she was a right-wing minister. The reality after six weeks is that things are settling: you have a right-wing government governing with the right. You have a National Rally which is absolutely useless and an opposition, the NUPES, which is taking shape. And today I don’t know what the government’s program is: to develop renewable energies or to stigmatize foreigners, to tax the superprofits of polluters or on the contrary to continue measures conducive to inequalities. They chose inequality and climate inaction.

Cyrielle Chatelain: Her general policy speech was very revealing: she wants to get out of dependence on fossil fuels “as soon as possible”, and it is in this “as soon as possible” that our difference lies. I think she understands what is at stake but she puts off the solutions until later. While it is fundamental, we no longer have time to wait. And in his speech, the first priority is the financial debt. For us, the ecological debt is the priority.

In Germany, the ruling SPD-Green coalition seems ready to make a concession to nuclear power in the face of the risk of an energy crisis this winter by renouncing to close its last power plants. Isn’t it time for French ecologists to do their update on carbon-free and non-intermittent energy to escape global warming?

Julien Bayou: Could you have made a more oriented question? Nuclear energy is expensive and perfectly unsuited to global warming, as we can see. Germany was excessively dependent on Russian energies, through the fault of Merkel and Schröder. Today they find themselves in great difficulty. In France, our situation is different: to focus on nuclear power, we have forgotten to invest in renewable energies. We are the only country in Europe that has not achieved its renewable energy development targets. With the nuclear lobby, there is no “at the same time” possible. Investments in renewable energies have been cannibalized.

Cyrielle Chatelain: I think it’s quite the opposite. We are a country that has made nuclear power the alpha and omega of its energy policy. What makes that we are very behind on renewable energies. And we realize this summer that half of the reactors are closed. Twelve because of corrosion and the rest because of the heat and the drought, the reactors cannot be cooled. So we can clearly see that nuclear power does not meet the energy needs of a warming world.

Read alsoBoris Vallaud (PS): “The government is not looking for a compromise with the left”

During the environmental primary, Sandrine Rousseau, who came second with 49% of the vote (nearly one in two EELV supporters) pleaded for an increase of 6 to 10 cents in the price of gasoline per year, every year for five years. . Today fuel prices are exploding… Can EELV continue to defend these positions without impoverishing the middle and working classes, already hit hard by the inflationary spiral?

Cyrielle Chatelain: This is a problem that already arose at the time of the “yellow vests”, of which the rise in fuel prices had been a trigger. But nothing has been done since to get people out of their addiction to cars. Then there is the price freeze that we have defended with Nupes to allow people to respond to the emergency. But the solution that was taken by the government of aid to all households ultimately benefits the richest.

Julien Bayou: It is an anti-social measure that has never been supported by Europe Ecologie Les Verts.

The Negawatt energy sobriety scenario, supported by environmentalists, foresees the disappearance of physical game consoles, the limitation of the time spent in the shower (less than 10 minutes), the reduction of the number of plane trips and the consumption of meat , the number of kilometers traveled by car… Can the necessary fight against global warming be consensual when it is based on vexatious measures?

Julien Bayou: What you have to understand is that inaction leads us into the wall. And so it is inaction that creates the most vexation. If you don’t fight pollution sooner or later you have to keep the kids out, you have to tell people not to play sports. If you don’t act, you end up with the worst of global warming. The cost of inaction is infinitely greater than the investments needed to prevent it. There is an issue of energy sobriety, but it is not just a question of vexations: thermal renovation relieves the same people who are very hot during heat waves and those who will pay a very high electricity bill this winter. . We propose to put billions on thermal renovation. It is an issue of justice.

Cyrielle Chatelain: We only see a small part of the program here, but the vexatious measures are what is being done. We are living through a catastrophic summer (drought, heat wave, etc.) and we have a minimal sobriety plan. That being said, on Negawatt, we need a structural change in our mode of production and consumption. Sobriety means being more sober in our behavior and sometimes fighting against unnecessary uses of energy. I don’t think we’d be any worse off if we didn’t have bright, interactive advertising screens. We must be able to assume that domestic flights for which there is an alternative train, well yes, that is no longer possible. A number of practices are no longer sustainable.

Read alsoAurore Bergé (LREM): “The RN is considerably helped by the attitude of LFI in the Assembly”

The possibility of a common Nupes list in the European elections is mentioned by some LFI executives. For EELV, which came out on top in the last Europeans, this seems like a trap… Do you subscribe to it?

Cyrielle Chatelain: We haven’t discussed it yet. What is certain is that for ecologists the European question is fundamental, it is a pillar of our history. And that we know that on international issues we can have disagreements, it was recorded at the time of the union.

Julien Bayou: This is not at all the subject nor the moment. We Europeans will study this in 2023.

Did Jean-Luc Mélenchon make a mistake by asserting that there is “only one China” of which Taiwan is “a full component”? Do his positions engage the left as a whole?

Julien Bayou: We are absolutely not bound by his remarks. We are for European defence, they for leaving NATO. Me what shocks me is when we say that we must let the Chinese settle the question between them because in fact we know very well that if China invaded Taiwan it would not be to give them kisses. It concerns the international community and this so-called pragmatism, this so-called realpolitik amounts to letting aggressive dictatorships manage their imperialism.

Cyrielle Chatelain: First, I would like to say that we did not line up behind Jean-Luc Mélenchon, we formed a coalition of four parties behind a common project. And in this project we have recorded our disagreements. So, no, the words of Jean-Luc Mélenchon do not commit us. He is the leader of rebellious France, which won 22% in the presidential election, but he does not engage the ecologists on this question. Our priority is to defend democracy.

Sursa articolului in engleza: Bayou and Chatelain: ‘This government has thrown the climate convention to the grinder’